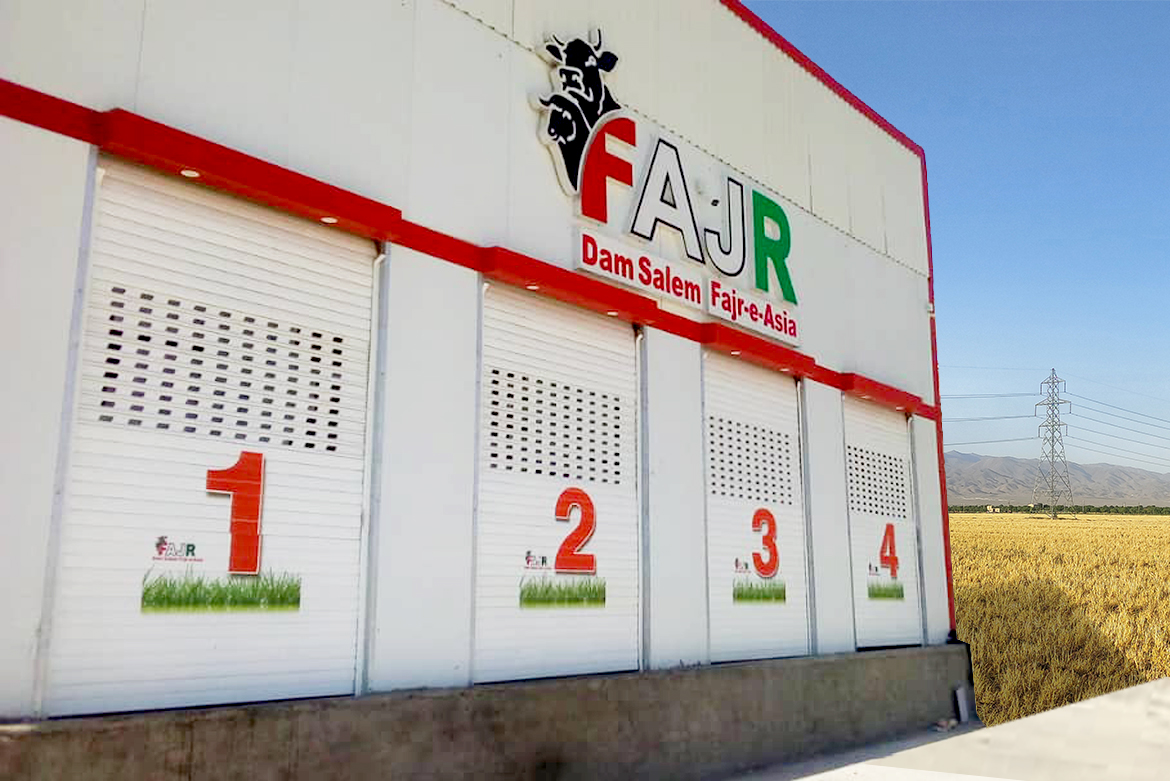 Living animals are transported to the slaughterhouse (quarantine) the day before slaughter and are prepared for slaughter the next day.

To begin with, the animal is first led through a special corridor to enter the cow trap.

First station: There is a cow trap where the trap door is opened and closed vertically by a pneumatic jack. Once the trap door is opened and placed, the trap closes in the trap and is ready for slaughter. To speed up this process to 200 to 300 heads in a work shift of less than 6 to 8 hours of electric shock, which is transmitted to the animal by the relevant operator with a gun. The output voltage should not exceed 110 volts. This is because the high voltage causes cardiac arrest and the heart does not pump and the blood does not drain from the animal’s body, which is called ionization, in which case the color of the meat becomes black and dark.

Second station: equipment and construction of metal strapper with hot galvanized coating and 2 ton electric crane, after the end of the livestock shock by the electric carcass lift and a special hook (blood hook) that is attached to one of the livestock legs, lift it vertically and Transfers blood collection line to industry line. Then, the slaughter is carried out in accordance with the Sharia issues and criteria.

Third station: The electric line starts moving after receiving the animal and the animal blood is transferred to the blood collection pond which is transferred through special storage valves and goes to the cooking pot by Irgan (air gun) and is cooked by steam. It should be noted that boiled blood is used in the poultry and fish industry.

Fourth station: There is an adjacent blood collection line which is delivered to the next station by the relevant operator and an electric hoist in two legs with 2 hooks.

Fifth station: To separate the special skin of the owl with the relevant chains or hydraulic peeler, the chain is rotated around the axis of the drum and the skin is removed and the two relevant operators with their existing pneumatic lift reach a high height in front of the animal and with pneumatic knives. Free the wall and the side of the skin to prevent the skin from sticking to the flesh.

Sixth station: In this heavy slaughterhouse station, after removing the skin, the chest is cut with a chainsaw and in the next station, the abdomen of the animal is cut, the rumen and the viscera are removed from the abdomen.

Seventh splitting station: In this station, for ease, split the pneumatic jack to open the foot of the animal and the chainsaw, which raises its operator to the highest point for cutting and splitting, and cuts and carcasses into two equal splits. Divides.

Eighth station Visit the veterinarian: The veterinarian confirms that there are no healthy animals after the examination and if there is a disease, he prevents them from entering the next station and the carcass is destroyed after being transferred to the crematorium.

Ninth washing station: In this station, the slaughterhouse of the heavy livestock of the washing cabin with the relevant nozzles, solenoid valve and electronic eye begins to wash the carcass. After washing, the carcass is weighed and then the carcass is pre-cooled. Slaughterhouses are required to comply with it and after 24 hours at a temperature of 2 to 6 degrees Celsius is marketed.

Note: Due to the interest of Iranians in consuming warm meat and the possibility of Crimean Congo fever spreading to humans, be sure to put the meat in the refrigerator for 24 hours after slaughter, then pack it or eat it.